It is a requirement of the authorities that all visitors over the age of 15 must present a Covid-pass with documentation of vaccine, immunity or negative test that is less than 72 hours old.

The authorities require everyone moving around inside the museum to wear face coverings or visor.

The current covid-19 guidelines from the authorities must be complied with throughout the museum's area. Read about our covid-19 initiatives and guidelines here.

We reserve the right to make changes to the reopening plan in accordance with guidelines from the authorities at any given time.

The Viking Ship Museum in the winter season offers exciting exhibitions inside the Viking Ship Hall, where the light from the fjord sets the atmosphere in the large beautiful hall, with the 5 Skuldelev ships.

Winter is a time for immersion and wondering about how the different types of ships in the hall bear testimony to the people and society in the Viking Age.

In the wake of the Vikings

Downstairs in the Vikinge Ship Hall, the exhibition 'In the wake of the Vikings' is shown, about how our boat builders build sailing, recreated ships based on the five unique Viking ships that were excavated at Skuldelev in 1962.

The exhibition takes visitors through the entire Viking Ship Museum's field of work from the archaeological excavations, reconstruction and to the impressive test voyages with the 'new' Viking ships.

In the Viking shib hall you can also experience the exhibition 'Get on board', where the walls of the room are illuminated by a video projection that shows the view from a sailing Viking ship - from quiet, calm morning to dark night in a stormy gale.

You can board two large recreated ships and feel the rush from sailing the ocean or immerse yourself in the wall of experience, where you can find out what the Vikings transported with their ships.

Daily tours in Danish and English

The guided tours are based on the five original Viking ships and go in depth with reconstructions of the ships, which have been built at the Viking Ship Museum's boatyard for more than 35 years.

>> See the timeslots for Danish and English tours in the calendar

The Sea Stallion and Ottar stay in the water

For the first time ever, neither the large tradeship, Ottar, nor the beautiful longship, the Sea Stallion, will come ashore this year. So there will be a whole new sight that will meet everyone at the harbor this winter, where these two large Viking ships will be in the harbor basin.

The rest of our fleet of reconstructions and other Nordic boats stand on the lawn in front of the Viking Ship Hall, where you can admire the beautiful clinker-built hulls from the outside. All the ships on land and the two ships in the harbor will be covered so they are not damaged by the harsh weather of winter.

CaféKnarr on the Museum Island

Embark on the Vikings' culinary world in CaféKnarr, where we serve food prepared according to the principles of 'New Nordic Viking Food'. We use the raw materials that were known by the Vikings, so here are neither potatoes, tomatoes nor cucumbers, but flatbread, kvan, sea buckthorn and pearl barley.

The food connects our maritime history with the Vikings' raw materials and invites the museum guests to experience the time of the five original Viking ships in new ways.

At the same time, the food also tells about the world the Vikings encountered on their travels to distant shores and the food cultures they met there.

There will be different daily dishes on the board in the Café, which are not on the menu.

>> See the delicacies in the seasonal winter menu

In the shop in the Viking Ship Hall we have lots of wonderful clothing, jewelry, books and danish design at display. So do stop by and find the perfect Christmas gift or something luxurious for yourself.

Both the Café and Museum Shop can be visited without a ticket to the Viking Ship Museum.

Special exhibition: In the Wake of the Vikings 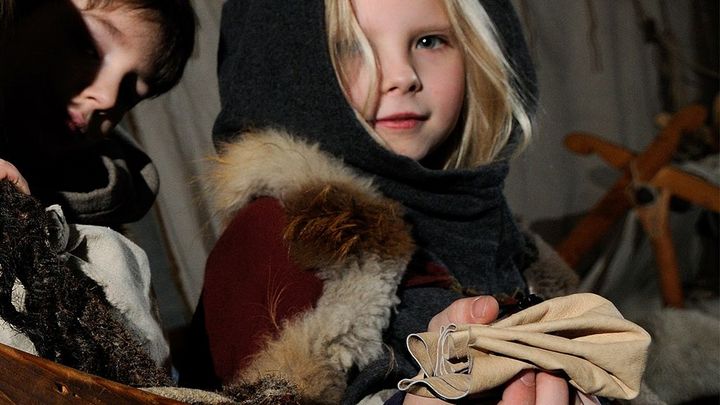 A museum for the whole family