To gain access to the museum's exhibition areas and indoor dining in Café Knarr, all guests from the age of 15 must present a valid corona passport, as well as a valid ID.

A facemask must be worn in all indoor areas of the museum, including the shop and Café Knarr.

It is possible to visit the Museum shop and Café Knarr without buying an entrance ticket.

» Read about our corona initiatives and guidelines here. 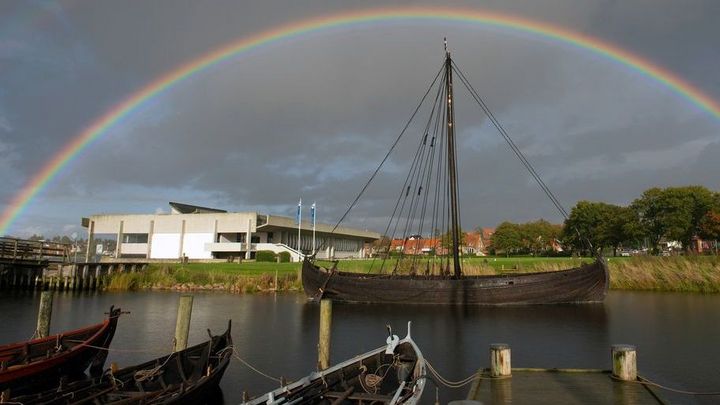 Information to our guests

Learn more about the Vikings and their expeditions

Learn about the Vikings

The Viking Ship Museum exhibits the five 1000-year-old original ship finds from the Viking Age (the Skuldelev Ships) as well as a fleet of sailing reconstructions. Several of these reconstructions and other Nordic boats are also available to sail in. You can also meet the craftsmen who keep up the traditions of the old maritime trades, and you can try your hand with axes, ropes and many other activities.

The permanent exhibitions are focused on the five Skuldelev Ships. The goal of these exhibits is to tell the story of these ships and of the many Nordic maritime adventures during the Viking Age. The five original Viking ships stand majestically with the Roskilde Fjord as a living backdrop. With this view, it becomes easy to imagine how the merchant set off for distant shores with his goods, the warriors waved goodbye to their families before the voyage and the fisherman embarked on the fjord with the hope of returning with a good catch.

Start your visit by watching our introduction film ”Five Viking Ships from Skuldelev”. The film lasts 14 minutes and is available in multiple languages.

» Read about activities at the Viking Ship Museum...

Visit the café at the Museum Island and sink your teeth into freshly made sandwiches and salads, delicious lunch dishes, homemade cakes, ice cream, tea, coffee and organic soft drinks and beer.

In the Museum Shop you will find an inspirering mix of nordic design, books and gift items. Visit the shop and explore our wide selection of hand-picked items.

Start you visit by watching the introduction film ”Five Viking Ships from Skuldelev”. The film lasts 14 minutes and is available in English, Danish, German, French, Spanish, Italian, Dutch, Chinese and Russian. There are no fixed showing times, but the film is run on request. Please contact the museum staff at the entrance if you wish to watch the film.

The Viking Ship Museum is a perfect destination for groups. Let us form the basis for your shared experiences. We can arrange sailing trips, guided tours and craft activities for both large and small groups.

Information to our guests